The Aldgate Square Commission is a new biannual commission supporting emerging artists in the UK.

Twelve artists nominated by members of the Sculpture in the City Arts Advisory Group were invited to submit a proposal for a temporary site-specific public artwork for Aldgate Square, considering the cultural and historical significance of the local area. 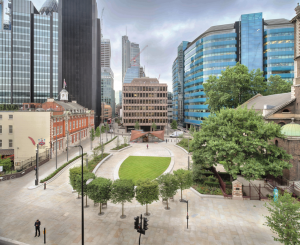 Aldgate Square, Image courtesy of the City of London Corporation

Following the first round of submissions, the Arts Advisory Group shortlisted five artists, who developed their proposals through a series of community workshops in June 2021. 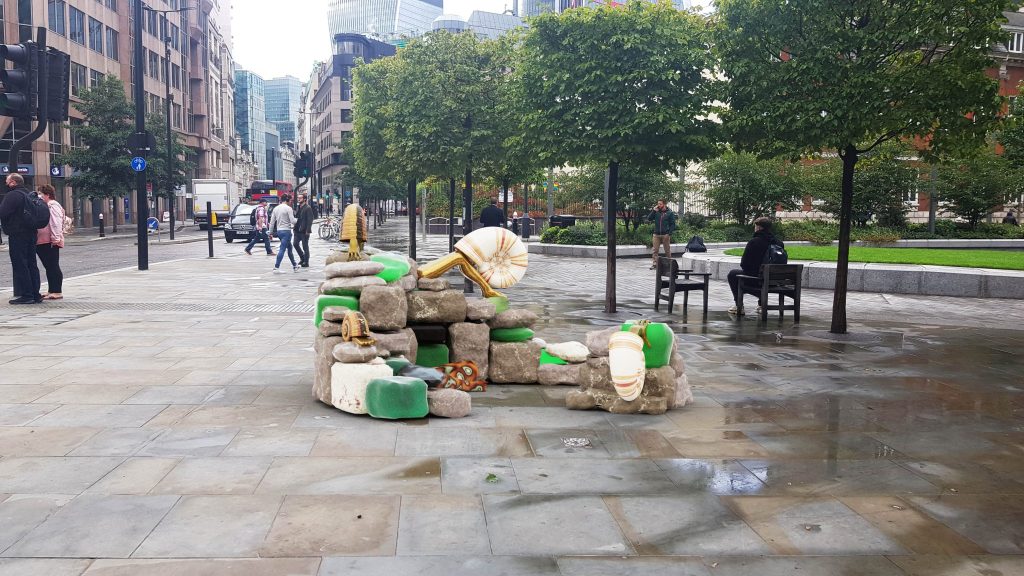 Earthing is a tactile public sculpture. It acts like a fantastical magnifying glass to explore interconnections between the synthetic and organic worlds in urban spaces, with the human body as the conduit between the two. The title references activities that reconnect you with the earth, and the form and materials are inspired by a crumbling mountain-top dry-stone shelter inhabited by imagined animal/human hybrids. 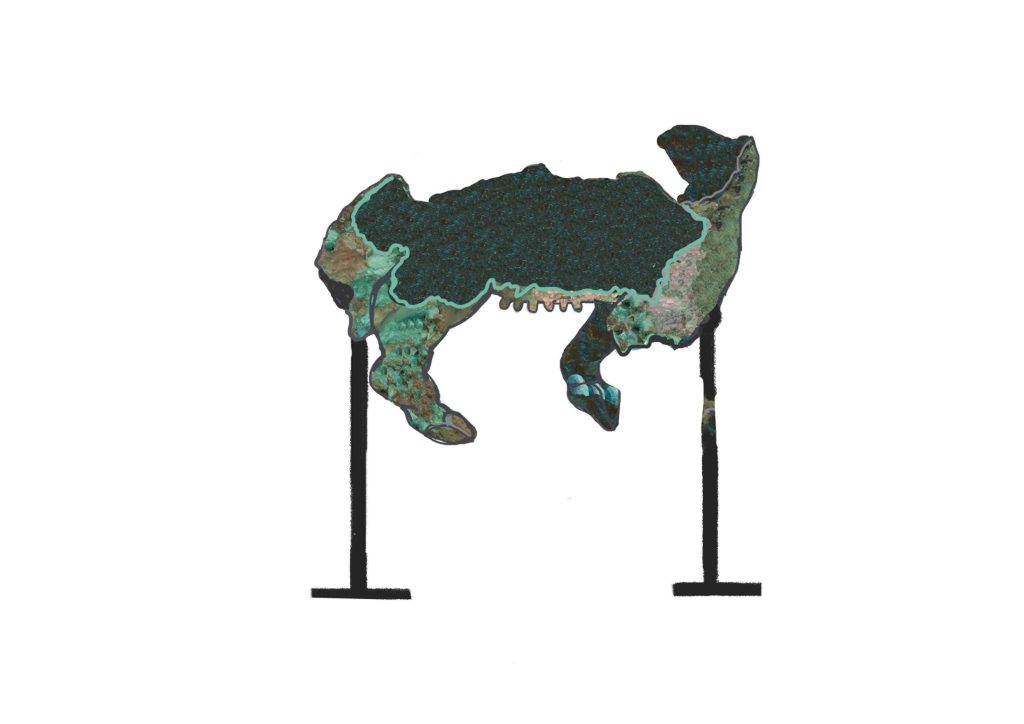 Guardian is a sculpture based on ancient mythological animals, which will be installed in Aldgate Square. It is based on the entrance guardians found at the gates of ancient cities such as Babylon, and will be designed to collect rainwater from its open tops, and to drain it from its udders, making it a constantly active sculptural work. 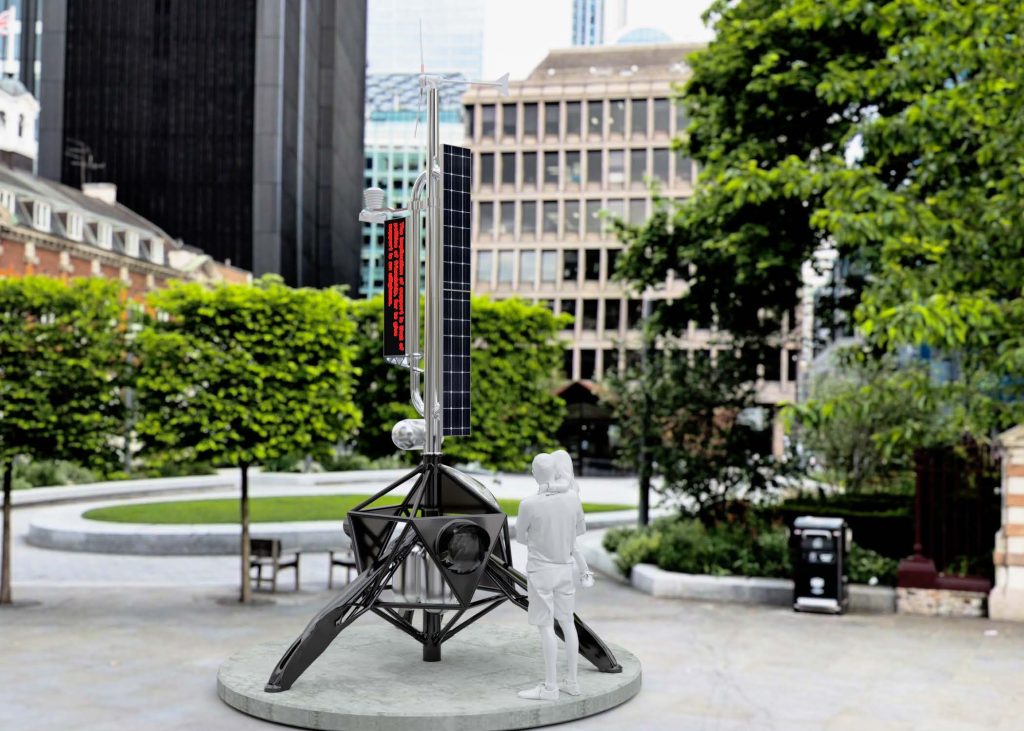 Byron Kalomamas, All the flags on the Moon are now white

The project All the flags on the Moon are now white is a sculptural device that would serve as an amplifier of voices and culture, shared between multiple artists and locals, utilizing renewable energy for its power. During its time at Aldgate Square it would seek to challenge, within the context of public art, issues of visibility and commoning by exploring what systems of support are necessary and how collaboration can facilitate the process.

The Portsoken Archipelago reconceptualises the foundational mythology of the Portsoken Ward and the ‘three combats’ performed by the Knighten Guilde ‘above the ground, below the ground and the third in water’ to address environmental challenges, contemporary communities, ancestral legacies, and the collective ecology between them, through three island sculptures. 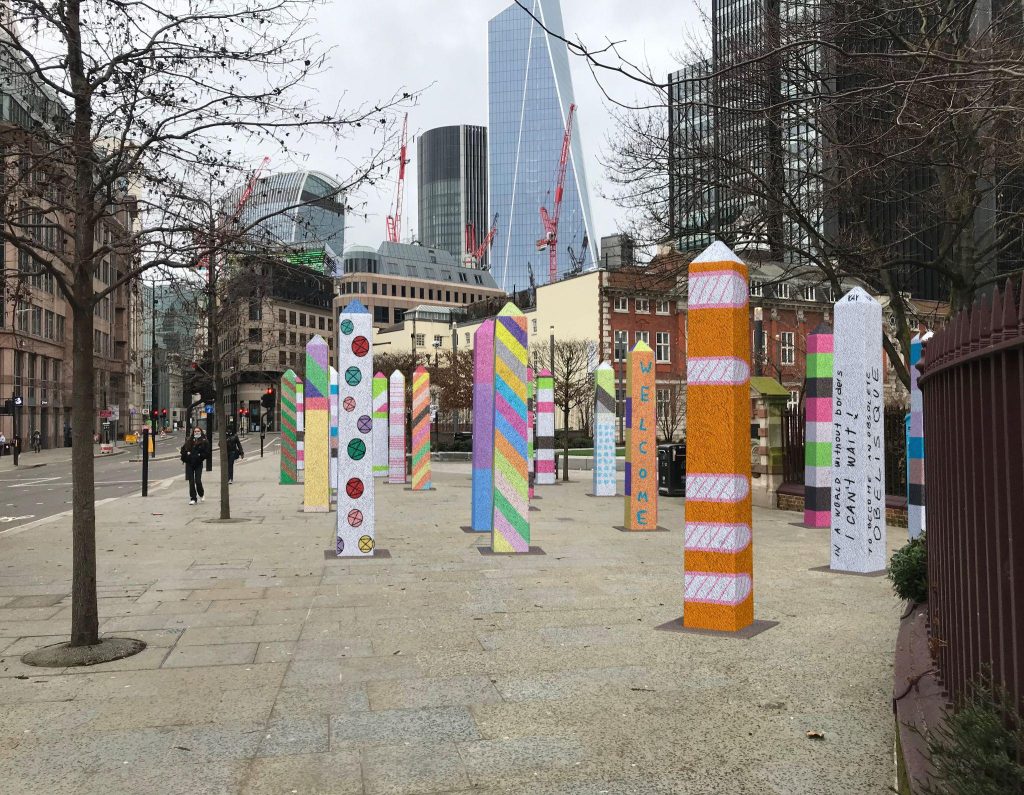 “St Botolph, after whom the nearby church is named, is regarded as the patron saint of ‘boundaries and by extension of trade and travel’. I find this especially resonant when travel is so restricted by legal and administrative policies. Whereas boundary markers are used to mark the edges of territory (local and national), this proposal alters their typical spatial distribution and traditional heraldic patterns. These designs are based on sketches by Aldgate residents and affiliates.” Harun Morrison

The Sculpture in the City Aldgate Square Commission is delivered in partnership with Aldgate Connect BID and the City of London Corporation Outdoor Arts Programme.